The 11-year-old Bronx girl — who suffered horrific burns on her face after a friend poured boiling water on her — left the hospital Friday looking like her old self.

Jamoneisha Merritt had boiling water tossed on her while staying overnight at a friend’s house back in August with several other girls.

The incident took place on August 7th at a Bronx apartment, Jamoni was sleeping over at a friend’s house when a pal doused her with scalding water in a prank that went gruesomely wrong.

The incident resembled the “Hot Water Challenge,” a YouTube-inspired trend in which kids pour boiling water on unsuspecting friends. However,  Jamoneisha’s cousin claimed, that Meritt and her friend got into an argument. “She told her if she goes to sleep, they were gonna do something to her. So, it was like 3:00 in the morning so she went to sleep. The girl on tape says she boiled water and she threw it on her.” 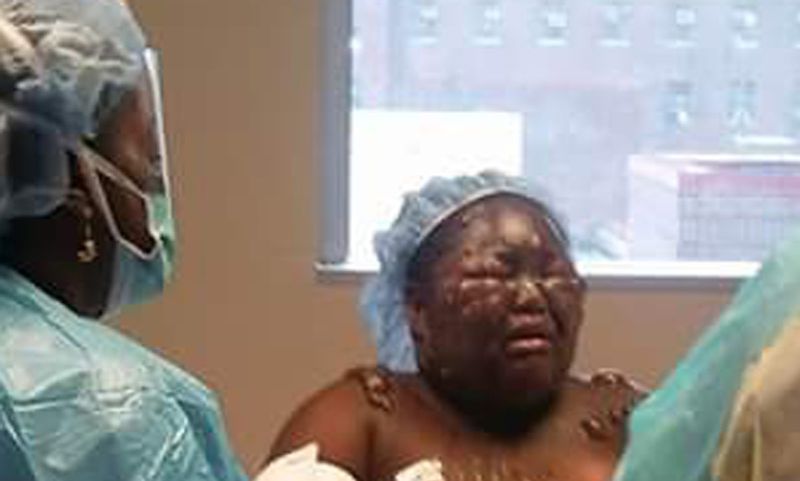 “I didn’t know what they was gonna do but I felt tired,” Jamoni recalled. “So after I was dancing I just sat on the couch and I fell asleep.”

She jolted awake feeling like her face was on fire.

Aniya’s mother applied ice to Jamoni and gave her a cold shower.

The girls offered a half-hearted apology and said it was an accident, Jamoni said.

“They were saying stop yelling and buggin,” Jamoni recalled.

Jamoni’s mother said she thinks the three girls and the mom should all be arrested.

“The mother is just as involved as the other kids,” Ebony Merritt said. “This happened at 4 a.m. but they didn’t come to my house until 5:30. That means she was there for an hour and a half while they were trying to cover their tracks.”

Merritt recalled, “All I felt was hot water dripping down on my face, and they put me in a cold shower and threw ice on me… I started screaming and yelling. At first, when I was in the hospital, I was looking sad and stuff, and crying.”

“She needs some semblance of justice for those scars,” Prestia said.

“Her spirit and courage should really be an inspiration to so many young people — especially those who’ve been the victims of bullying,” Prestia added.

Earlier in the day, Ebony Merritt posted photos to Facebook of her beaming daughter relaxing at home.

“How can you say someone’s happy to be home[?] Can’t you see the look on her face,” wrote mom Ebony Merritt. “She’s in good spirits. She’s great she wants to thank all of y’all for the love that you showed her.”

“God is good all the time,” she added.

Jamoneisha’s mother Ebony has set up a GoFundMe page in hopes of covering the family’s medical expenses.