When a mother went into labor unexpectedly, one flight attendant jumped into action.

A Frontier Airlines flight attendant in the US is being hailed as a “hero” as she helped deliver a passenger’s baby on a flight from Denver to Orlando.

Flight attendant Diana Geraldo helped the passenger, Shakeria Martin, deliver the baby on board over a toilet after she went into early and unexpected labor during the flight.

Martin felt fine when she boarded the plane and settled in for a nap. She awoke to painful contractions and couldn’t believe it was happening on the plane.

“I was feeling fine and everything and so I went to sleep and I woke up and my contractions were, yeah…The first thought that ran through my mind was this cannot be happening right now. This cannot be, there’s no way I could just have this baby on this plane.”

The airline said flight attendant Diana Giraldo calmly led the mother to the back bathroom and helped deliver the baby girl. The 3-hour-flight had to be diverted to Florida’s Pensacola Airport where a medical team was waiting to disembark the mother and the newborn and then continued on to Orlando. 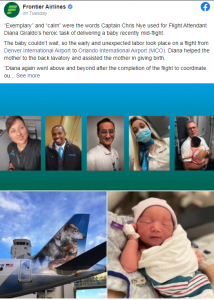 Captain Chris Nye, who was piloting the plane, called Giraldo’s actions “exemplary” as she assisted with the birth while he worked on diverting the plane. The captain said the team, especially Giraldo, did a wonderful, “heroic” job.

Here’s what Nye said in a statement:

“The whole crew really did a great job. I transferred controls and flying duties to my First Officer as I coordinated the diversion. Dispatch did a great job as well by suggesting Pensacola Airport and getting a gate and paramedics ready for us. This was a job well done, and I was happy to see everyone working together to successfully deliver a newborn on an aircraft!”

Frontier also revealed that the Mom gave her newborn the middle name ‘Sky’ as an appropriate reminder of the extraordinary conditions of her arrival in the world.

Giving birth on a plane isn’t something that happens every day, but it does happen on a semi-regular basis. A woman gave birth to a healthy baby boy mid-flight on a Turkish Airlines flight from Istanbul to Chicago in September, and a woman gave birth after going into preterm labor on a Delta Air Lines flight from Utah to Hawaii in April 2021, with the assistance of three NICU nurses who happened to be on board.

It’s not the first time something has been named after an experience: in February 2019, JetBlue named a plane after a baby boy born on one of its flights from San Juan, Puerto Rico, to Fort Lauderdale, Fla.