This personal trainer may have caught his wife having sex with a homeless man, but what he did next was completely shocking!

The surveillance cameras caught the shocking moment when Eduardo Alves, a Brazilian personal trainer, caught what he thought was his church-going wife having sex with a homeless man, of all people, in his car.

It doesn’t take long for Alves to realize that it was his wife who was engaging in sexual activity with that vagabond, and sure enough, he flies into a rage, attacking the vagabond. He begins by slamming his fists against the window and tears it open in one fell swoop. He proceeded to give the man who had been sleeping with his Christian wife a tremendous beating. 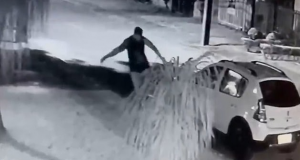 After the altercation, the wife told one of her friends that she had been sleeping with that homeless man because she had been the recipient of a delusional “message from God to try to “help” the man through sexual relations because she was told that he was a rough sleeper. This shocking attack occurred in the early hours of March 10, 2020, in the Jardim Roriz in Brazil’s Federal District.

He managed to tail his wife to her car, and that is when he discovered that it had been parked near a school. He approached the vehicle and he could not believe his eyes – to his shock and revulsion, his wife was having sex with that homeless man that she was supposed to be helping!

As Alves continues to beat the homeless man senselessly, his wife is now lying on the ground and clearly in a state of distress at having been caught with this man. 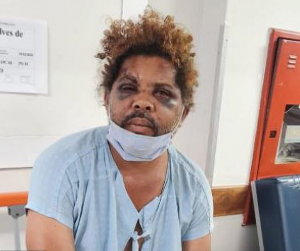 Of course, police arrived to address the situation, and that was when Alves claimed that his first thought was that the homeless man was sexually assaulting his wife, and that was why he gave the man such a tremendous beating. It was later that he learned that the man had been engaging in intercourse with his wife because she was claiming she had a message from God to do it.

While Alves’s wife told police that she often wants to help vulnerable people like this homeless man, this probably isn’t what everyone had in mind, to say the least.

They brought the homeless man to a Brazilian hospital where he was treated for two black eyes and bruises all over his body. Even though he was beat up by a personal trainer who was in top-notch shape, the homeless man is recovering well and he seems glad that he had a moment in the sun with this man’s appealing wife.

Presently, they are not filing any charges against Alves for brutally assaulting the man who was having consensual relations with his wife. Either way, Brazil’s investigative police force, the Civil Police, is still examining the evidence in the case and may choose to press charges if they think it is appropriate.

Only time will tell what they decide to do in this situation.