On Tuesday, Vice President Kamala Harris gave a speech after the Chauvin verdict was announced. Derek Chauvin was found guilty on all charges in the murder of George Floyd. Read the transcript of their speech remarks here.

Kamala had her own “stumble” incident before delivering her speech, granted it wasn’t as horrific as Bidens, but it still makes everyone wonder what is wrong with these two that they can’t seem to walk without stumbling and falling.

It can be remembered that Biden fell like a drunken sailor up the stairs of Air Force One three times and now his Kamala marks her own. 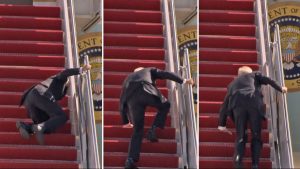 Kamala was attempting to give her statement on the George Floyd guilty verdict, and as she approached the podium, and presumably tried to climb up on a step, she nearly toppled right over.

Karma is for Kamala and it’s having a field day with these two cheaters.

She managed to catch herself and then awkwardly muttered “how’s that for an entrance?”

Well, Kamala, it sucks, to be honest, and it makes you two bumbling, nervous nellies look even more ridiculous to the country and the rest of the world.

Vice President Kamala Harris stumbles up the podium before giving her remarks on the Chauvin verdict. pic.twitter.com/gIt7bHCHXe

Here are some of the comments:

“That was done on purpose to cover for Biden. (I’m joking)”

“Joe’s disease must be contagious”

“Too bad we didn’t see her fall on her ASS!”

“Stairs are the Biden/Harris kryptonite”