Please do yourself a favor and watch Tico the parrot and his owner, Frank Maglio Jr. rock out to some classic rock hits!

Keen followers of pet owners filming animals doing amusing things and putting it online may already be familiar with the talents of Tico. He’s a double-yellow-headed Amazon parrot, who likes to do some freestyle caw-ing over his human-playing guitar, whose hits include The Beatles’ Here Comes The Sun and Third Eye Blind’s ’90s tune Semi-Charmed Life.

Frank has always enjoyed playing the guitar, but when the pandemic hit, he found himself strumming the strings more than usual. While he was strumming, Tico decided to make it a duet and started singing along.

One day while Frank was strumming “Stairway to Heaven,” Tico started to sing along, and Gina pulled out her phone to start recording the unusual duet. The Maglios posted the video on Facebook, and the rest, as they say, is history. 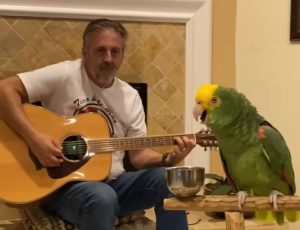 Frank started a YouTube channel called Tico & The Man Frank Maglio where he posts videos of his duets with his pet parrot. The channel has over 250,000 subscribers. Frank also continues to post the videos on Facebook.

Maglio shared the video on YouTube along with the following description: “Last night we remade Stairway to heaven. It was one year ago that we shot that 1st video and posted it to Facebook, not knowing millions of people would eventually be watching. It was purely discovered & launched Tico’s fame. Let’s do this again pls share.”

Because Tico’s first video performance was such a hit, Maglio decided to record a second video. In this one, Tico is “uncaged” and singing along to the Led Zeppelin hit “Stairway to Heaven.” Although the bird is not a perfect singer, the parrot does its best to nail down the melody and sing along to the guitar playing. Clearly, it was a hit among Americans because the YouTube video also went viral with nearly two million views at the time of this writing.

Viewers love Tico’s voice and have left comments saying just how much the happy videos have cheered them up on otherwise difficult days.

One person wrote, “I had a bad car accident in the past week. You guys have really cheered me up with Tico’s voice and your great guitar playing!! Thank you so much for this, I check out your channel regularly.”

Another comment reads, “That birds Vibrato and ability to tone/pitch shift so quickly and so effortlessly is phenomenal! You and Tico are a magical duo! Keep it up guys, I love seeing this kind of content when I pop onto YouTube.”

One person was reminded of their own pet after seeing the video, “My budgie used to compose accompaniments to music we heard, ringing his bell at different tempos and in musical ways frankly he understood better than I would, and vocalizing subtly in accompaniment. He died this spring. I miss you, Little Genius.”

Hear Tico and Frank before “Stairway to Heaven” for yourself in the video below: