From Fact to Fake news real quick. This is how the left makes every truth spin into fake news once it didn’t fit their narrative.

They previously reported how a Tennessee school district has banned a book about the Holocaust. The said book was all about the author’s parents surviving the Holocaust and McMinn Schools has been accused of banning Maus. The book is a highly respected and Pulitzer Prize-winning book.

I couldn’t see any reason why would a school would ban such a book like this. No reason because the truth is they didn’t make any ban, the school only removed the book from the 8th-grade curriculum but it is still available in the school’s library. 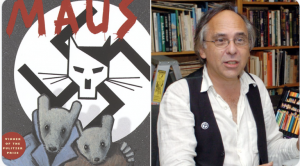 And the school’s reason for removing it from the 8th-grade curriculum wasn’t because of the Holocaust but because they didn’t want the 8th graders reading content with curse words in it.

Leftists couldn’t see the difference between the two. The book is still available in the school libraries and it can still be read by the students it’s just no longer part of the required curriculum.

Take a look at how the media and the radical left is spinning the truth:

To ban #Maus for being an uncomfortable read is, in fact, to be against teaching the Holocaust, regardless of the school board member’s protests to the contrary.

More people will read MAUS which is a brilliant graphic novel. The best way to make sure kids really want to read and see art is for terrified adults to ban it.

As I’ve offered before with other banned comics, I’ll donate up to 100 copies of The Complete Maus to any family in the Mcminn County area in Tennessee. Just DM me your address! pic.twitter.com/ptmdjmwYE5

1/ Maus has played a vital role in educating about the Holocaust through sharing detailed and personal experiences of victims and survivors. On the eve of International #HolocaustRemembranceDay, it is more important than ever for students to learn this history.

Haha hey remember when the conservatives got mad that a Dr. Seuss book was just quietly allowed to go out of print. Anyway they’re banning Maus

As of the moment I only cite one media outlet that’s brave enough to cover and show the truth.

Here’s an excerpt from the Red State:

McMinn County, Tennessee, made the news late last night and it will, I suspect, make news today. If one is a devotee of the left, McMinn’s school board is composed of knuckle-dragging Neanderthals and anti-Semite book-burners. Reality is different.

McMinn County has a total population that wouldn’t fill a baseball stadium but it became a lighting-rod on Wednesday, when its school board voted to remove one book from the 8th grade language arts curriculum.

The book, titled, “Maus,” is a serialized graphic novel. “Graphic novel” is another way of not calling a 296-page comic book a comic book. Its subject is the Holocaust, and it’s illustrated with animal metaphors. Jews are mice (thus the title), Germans are cats, and the French are frogs. The author of “Maus” is Art Spiegelman. “Maus” is told as an interview with Spiegelman’s father (a Polish Jew) who survived the Holocaust. Published in the 1980s, the novel uses heavy-line cartoon imagery to tell a story of the Holocaust. In 1992, it won a Pulitzer Prize by special award.

When the school board in McMinn County removed “Maus” from the 8th grade reading list, that decision should have remained as a local choice of a small rural county school board changing its middle school curriculum. Frankly I am surprised that “Maus” was part of reading material for any 8th grade language arts course. It seems more appropriate for high school or college.

Someone must have alerted the crazies on the left because a local non-story was turned into a national story literally overnight. CNBC called it a book “banning.” The headline blared:

Spiegelman is quoted as saying:

“I’m kind of baffled by this,” Art Spiegelman, the author of “Maus,” told CNBC in an interview about the unanimous vote by the McMinn board to bar the book, which is about his parents, from continuing to be used in the curriculum. “It’s leaving me with my jaw open, like, ‘What?’”

Except, that isn’t what happened. The book isn’t banned. Maus was removed from a reading list because the board fielded complaints about curse words and a depiction of nudity that the board deemed inappropriate for 8th graders. “Maus” wasn’t even banned from the school library. Copies weren’t torched, and it wasn’t banned because it’s about the Holocaust.

Also the school board’s vote was taken on January 10th. Over two weeks ago. The vote didn’t come to light until the night of January 26th. January 27th is Holocaust Remembrance Day. The timing was intentional. It was orchestrated that way. Someone wanted to time this to embarrass McMinn County and to frame this as something like: “Local Tennessee knuckle-draggers ban Jewish book on Holocaust Remembrance Day.”. It’s pathetic, obvious, and a lie.

By example, the place where all sense of reality goes to die (Twitter) was ablaze with the “ban” lie.

If you know someone who might have spread this lie and fake news please share this article with them to correct their thoughts and if the truth matters to them, then they will appreciate it.

But the left is trying to silence it.