The FBI asked for help to find Rachel Powell, the Pennsylvania mother of eight who allegedly broke a Capitol window with a battering ram during the January 6 incident.

In early February 2021, Powell turned herself into the FBI.

Rachel Powell, a.k.a. “the bullhorn lady,” is a mother of eight who hails from the little Pennsylvanian town of Sandy Lake in Mercer County. In pictures and videos of the protest, she can be seen wearing a pink hat, driving a pole into the Capitol, and shouting commands from a bullhorn.

In the FBI’s criminal complaint, Powell is connected to a scene inside the Capitol in which a group of people was “discussing how to further penetrate the Capitol building.”

Here’s what the FBI documents state:

“One individual is heard asking, ‘What’s the floor plan.’ Another man with a helmet is heard shouting, ‘We just need a plan. We need enough people. We need to push forward.’ Shortly after, Rachel Powell is clearly seen speaking through a bullhorn and giving very detailed instructions about the layout of the Capitol building to others inside the room. She can be heard stating that she had just been inside the Capitol building in the adjacent room and that they should ‘coordinate together if you are going to take this building,'” 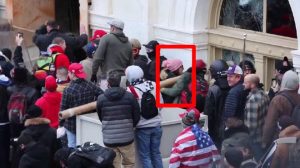 She was seen in videos and photos on January 6 using an ice axe as a ramming device to breach the windows of the Capitol. 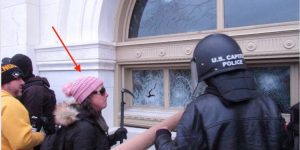 Help the #FBI identify this woman who allegedly unlawfully entered the U.S. Capitol on January 6. If you have information, submit a tip to https://t.co/buMd8vYXzH. When providing a tip on any of the below photos, please refer to photograph 110. https://t.co/QkV52OYdZ2 @FBIWFO pic.twitter.com/iANB6bZ96z

Social media leftists begged and pleaded with the January 6th Witch Hunt Committee to call Rachel Powell in to testify before the committee, but like Ray Epps, the committee and the deceitful media, who were initially all over the story of Rachel Powell, have lost interest in one of the most prominent “insurrectionists” of that day, the 100PercentFedUp reported.

Help the #FBI identify this woman who allegedly unlawfully entered the U.S. Capitol on January 6. If you have information, submit a tip to https://t.co/buMd8vYXzH. When providing a tip on any of the below photos, please refer to photograph 110. https://t.co/QkV52OYdZ2 @FBIWFO pic.twitter.com/iANB6bZ96z

Rachel Powell did not support Donald Trump in 2016 but she unexpectedly became a fan of his in 2020, according to an article by Ronan Farrow that appeared in The New Yorker on February 21, 2021. Powell told the New Yorker, that she was not a part of “a plot—organized”, she said, “I have no military background […], I’m a mom with eight kids. That’s it. I work. And I garden. And raise chickens. And sell cheese at a farmers market,” the publication added.

The report continues that while the FBI was looking for Powell, the Pittsburg Post Gazette reported that Ms. Powell gave the interview to Ronan Farrow.

“Ms. Rochlin also recounted how Ms. Powell left her children unattended at home to go to Washington that day and later gave an interview to the New Yorker while the FBI was looking for her,” The publication reported.

Powell’s story has been utterly abandoned by The New Yorker, Vice, and CNN, all of whom published critical articles on her in the wake of January 6.

The 100PercentFedUp added that The only update to Ms. Powell’s case appeared on local KDH2  and the Pittsburg Post Gazette on June 7, 2022, where they claim Powell is asking to have her ankle monitor removed as she awaits trial, arguing that home detention is “burdensome” and is “affecting her work and home obligations.”

“As for Ms. Powell’s current living conditions, Ms. Rochlin said Ms. Powell had sought and obtained approval from the pretrial services office for her current address “despite its alleged lack of space for all of her children.” She also noted that Ms. Powell doesn’t have full custody of the children; their primary residence is with their father. The children are only near Ms. Powell when they come to visit.”

Until now it is still a huge question why Rachel Powell allegedly left her minor children home unattended just to participate in Capitol riots and how was she able to tell those people the Capitol’s specific facts about its layout?