Human trafficking is no longer new in the state of Michigan, we can see it all over the news. In fact,  the state has among the highest number of trafficking cases in the nation, and one local man just witnessed the horror that nearly happened in his family.

Nahar Ali never thought his family would be part of the statistics in the human trafficking rings in his state, according to his narrative while he and his family doing shopping at Target. Ali made the video while he was sitting car and told others what had happened to his wife and youngest daughter as he discussed the distressing reality that’s being ignored.

Ali said on his Facebook video that he purposely made the video to let others know that human trafficking is really happening and anyone can be the victim and would like to help save someone else from being taken.

Ali explains in his video what really exactly happen while he was sitting at the Target, looking for a group of men who almost abducted his family. In an effort to raise awareness, he describes the traumatic experience his wife and youngest daughter went through when they were suddenly surrounded by three vehicles in the Target parking lot after the two had gone shopping together. 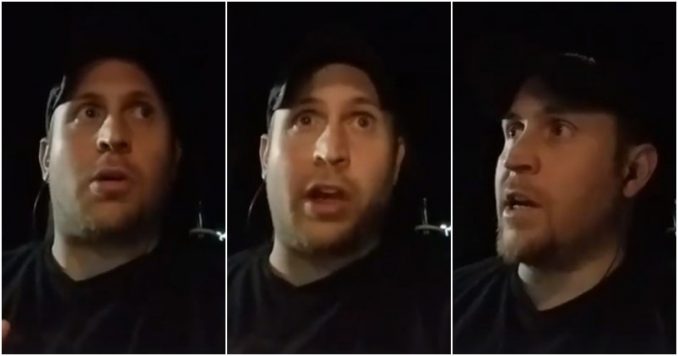 “This human trafficking thing has become very common for women and children shopping at grocery stores, department stores, anything of that matter,” the concerned family man declares, explaining that he returns to the parking lot every few nights to watch for the group of cars that surrounded his wife, believing these people are actively scouting the area for new victims.

“This is a real thing going on in Michigan,” he says. “We are the number 2 state for human trafficking, and it is happening all over. I don’t care where you live, how safe you feel, I don’t care about any of that. You better hear me when I tell you,” he warns, adding that a detective he knows “could tell you stories that would keep you up at night if you have a wife or children.”

According to the man in the clip, seeing suspicious vehicles parked in the rear of store parking lots is very common as these criminals look for their next victim to grab. “It’s weird, it’s gut-wrenching,” he adds, speaking of the people who are suspiciously waiting in the back of parking lots late at night for a great length of time. “Who are you looking for, sitting out there in the dark?” he asks rhetorically.

“I could’ve lost my wife and my child to this situation,” he continues, relaying that he’s thankful two women came out of Target that night with an awareness that made them realize something wasn’t right, causing them to sit and watch after getting into a car near his wife.

“There’s so much going on in this country right now, and everybody wants to fight with everybody. Here’s something we can all stand behind,” he says, pointing out that “these stories are popping up so frequently,” we must “understand that we all need to be talking about this.”

He urges viewers, “Watch when your family goes out at night, keep an eye on your children, keep an eye on your wife,” before adding that it’s important for people, especially women, to have a way to protect themselves in public. “If she’s able to carry a gun, great. Mace, a knife, something.”

He recommends that women avoid shopping at night, regardless of where they go. “These vehicles are parked suspiciously in different parking lots all over. These stories are popping up left and right,” he warns. “Be vigilant, keep your eyes peeled, look around for people.”

He tells his male viewers to also keep a watchful eye for women who may be shopping with their young children and heading out to the parking lot. “Keep your eyes peeled when you’re leaving because you never know if that person could use an extra set of eyes in their situation,” he says.

Since the night she was nearly abducted, his wife “can hardly sleep, thinking about this situation.” He says, “She feels that we need to look out for other people, so that’s what we’re doing.” They are making it their mission to catch the men who were prowling Target that night while also warning and, hopefully, saving others from meeting the fate his wife and daughter narrowly escaped.

“This is something that needs to be talked about a lot more,” he urges. “The media loves to cover all the hatred in the world right now, but they don’t want to talk a lot about kids and people being taken, and how much this stuff is happening, and the price tags that are on people’s heads.”

Concluding his emotional plea, he says people need to pay attention because it can happen to anyone, any time, any place. “They are taking people and they are willing to risk anything to do it. They’re fearless. I wish they would have the live security video of what happened to my wife, and you could see how fearless these three cars were that surrounded her and how serious this situation is,” he warns.

Saying he hopes that people begin to talk about stuff like this so we can shut it down, he vows, “So help me, if I ever see your wife or your kids in trouble, I’ll take action,” adding, “I hope some of you do the same. Got to start looking out for people. We got to start caring more. We’re so busy wanting to fight over the dumbest crap in this world, we need to care about the real threats going on, and this is real. Taking women and taking children is real.”

This guy is right. According to experts, human trafficking is “the fastest growing crime, not only in the world but also here in America.” So, it’s time to start the conversation, and sharing his warning is a good place to begin. Don’t wait to raise awareness until you find you or someone you love on the receiving end of this problem — by then, it could be too late.