In an ultimate show of passive-aggressiveness, the parents of a four-year-old have been heavily criticized after reserving three tables at a public park for their child’s birthday party.

The incident took place on a busy Saturday/labor day weekend when many families would have been celebrating the upcoming Labor Day in parks and open spaces.

Three tables were draped with cloths in preparation for the party and, perhaps unsurprisingly, the monopoly of public benches did not go down well.

A passer-by took a picture of the note and the empty tables on Reddit, sparking a heated debate. The, which has over 65 thousand likes, sees user AV16mm share two images.

The first is of a handwritten sign that reads: “Reserved for a birthday party. Please respect the space we’ve set aside and do not use our tables. This is a 4-year-old’s party. Don’t be the one to mess it up. Thank you.” 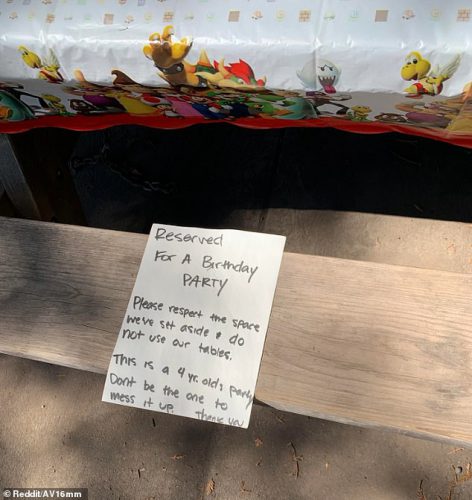 The second photo is of four unoccupied park benches with table cloths in a reasonably busy park, with people sitting on the grass in the background, and a person sitting in a camping chair to the right left of the tables. On what appears to be a hot day, the four tables are the only ones visible in shade.

“Busy public park on a hot Saturday/Labor Day weekend. Seems super entitled. Park has been open for four hours, and no sign of them. All the other tables are full,” the Reddit user’s post said.

According to the Reddit user, the park bench tables were not used for at least six hours. When the party did arrive to celebrate the child who was turning four, they were “very rowdy” and disturbed everyone nearby with their loud portable music system.

“The rangers had to come and have a very long chat with them. After that, they settled down,” the Reddit user explained in their post. 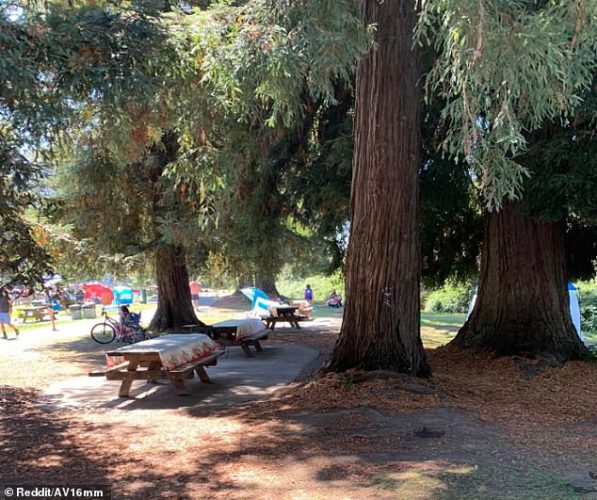 No one used the reserved tables. However, some families did set up blankets near the tables to show that they didn’t respect the parents’ unofficial reservation.

In response to the Reddit post highlighting the incident, one somewhat sympathized with the family and said:

“Several people could have used the chairs and left by the time they even showed up. Do you think this is entitlement or an extreme lack of awareness? I guess both types of people probably do this.”

Another said: “I understand them wanting to make sure they have seats for a party they want to throw in a public park, but preventing everyone from using them all day when they’re not even there yet wasn’t a great choice.”

Another user added a few proposed amendments to the note to give it a softer stance compared to the original version: “We’re having a birthday party for our four-year-old at noon. Feel free to use this table until then, but please leave it by noon so we can celebrate this special day with our family.’ Something like that.”

Despite some being on the side of the family, the original poster on Reddit highlighted that park rangers do not take official reservations for tables.