One SkyTrain rider was able to witness one scene inside the train that would always remind him.

Ehab Taha posted the encounter on his Facebook page where he told how he saw a distraught man start cursing, shouting, and moving erratically.

“He was touching a few people and everyone was getting scared and anxious around him — myself included if I’m being honest,” he said.

He even said that he was thinking about moving away from the man when he noticed a woman reach out her hand towards him.

He said, “She didn’t try to grab him or anything like that, she just reached out her hand and waited until he reached back. They just held hands for 15 or 20 minutes until he got to his stop.”

He continued, “He sat down next to her, he calmed down and he stayed there silently, sitting on the floor.”

The man sat on the floor next to her for about 20 minutes until he reached his stop. He told her “Thanks Grandma” and left the train.

“He was crying by the end of it,” Taha said.

After the man left, he approached the elderly woman and asked her how she knew what to do to calm the agitated man. “I spoke to the woman after this incident and she simply said, ‘I’m a mother and he needed someone to touch,’ and she started to cry.” 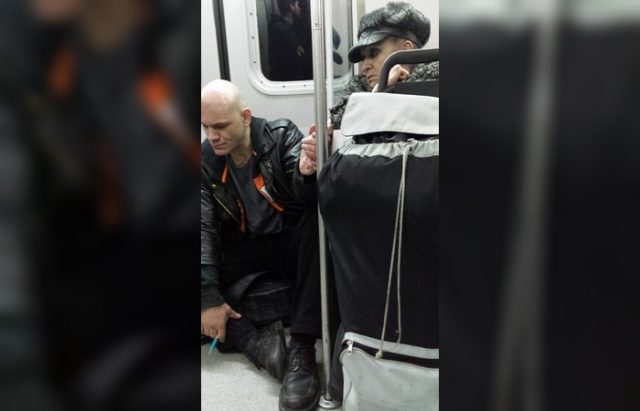 The woman explained that was led by her motherly instinct, having raised two sons who are around the same age as the man on the train.

He was amazed at the woman’s selfless compassion that made the man calm. None of the other passengers would have thought to even approach the man due to the risk of him becoming violent.

Taha learned a valuable lesson which he also shared on his Facebook post. “Don’t fear or judge the stranger on the bus: life does not provide equal welfare for all its residents”.

The post together with the photo captured has been shared over 14,000 times since he posted it. He says he’s “overwhelmed with how much it resonated with everyone” but that there was a clear lesson.