This thug thought he was scamming an old grandmother, but she was truly tougher than he realized! Kudos to Grandma!

A would-be phone scammer was apparently targeting elderly people, but he definitely met his match when he attempted to scam one upstate New York grandmother. This individual happened to be a former 911 dispatcher, and so when she received an odd call from the man who was claiming to be her grandson, she knew something seemed a bit off. The man claimed that he was in jail for a DUI and needed $8,000 in cash right away.

Jean Ebbert told Fox News that the first thing that tipped her off was that she knew that she didn’t have a grandson that was old enough to drive. Thus, she knew immediately that it was a scam, but she decided to keep playing along anyway despite several family members telling her to hang up. “My son was like ‘hang up ma’ and I’m thinking you’re 40 years old I’m 73 and you’re telling me to hang up?” Ebbert recalled. “And I didn’t hang up. I usually hang up.”

The scammers were thinking that they had locked on their prey, and it wasn’t long before Ebbert was speaking to another man as well. This individual was claiming to be her grandson’s lawyer and he asked if he could come to the house in order to collect the bail money.

Ms. Ebbert calmly told the man that she did indeed have the funds on hand and gave him her address. However, there is a twist to this story: she also called the Nassau County Sheriff’s Department and alerted them to what was going on. This granny is tough-as-nails.

Nassau County officers promptly arrived at Jean’s house, and they were interviewing her about the scam calls. As if on cue, another call came in from the supposed bail bondsman, according to WABC.

“Apparently they thought they had the big fish,” Ebbert noted. “They actually thought I was going to give them some money.”

According to Fox News, the man showed up at Jean’s house and that is when she handed him an envelope full of paper towels. She then watched as the police pounced on the scammer, a man who was later identified as Joshua Estrella Gomez of Mineola, New York. Gomez was flabbergasted as they hauled him away in handcuffs and charged him with attempted grand larceny in the third degree. 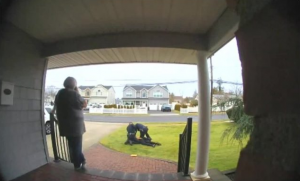 This is what members of law enforcement call a “grandparent scam.” Elderly people being targeted by scammers is nothing new, but targeting elderly people from those claiming to be relatives is definitely a new phenomenon. The Federal Trade Commission began discussing this type of scam back in 2018, and they even created an educational video to help senior citizens be alerted to some of the red flags of this scam.

In regards to this case, the Department of Justice announced that they had arrested six people as a part of a nationwide racketeering ring devoted to using similar scams to swindle nearly $2 million out of almost two dozen people. However, this was one case where the Seaford, New York woman wasn’t fooled or an easy target.

“I knew that this man was a scammer,” Jean said to CBS WLNY. “I just knew that he wasn’t going to scam me.”

One of the things that tipped Jean off was that the man who was calling her and claiming to be her grandson said that he was in jail for driving under the influence couldn’t possibly be one of her grandsons because none of them were driving age. However, many elderly citizens aren’t as lucky as Jean because they suffer from dementia.

“She’s smart enough to call out and reach out to the police department and say, ‘I think I’m being taken advantage of,’” Nassau Police Commissioner Patrick Ryder told reporters at a press conference, according to WABC. “Speak to your families. Speak to your neighbors. Visit those that are vulnerable. Let them know, don’t listen to these scams,” Ryder warned. “These individuals sit at home and have nothing else to do but think of a way to take advantage of our elderly.”