Four men, including a partner in the well-known Maund Automotive Group, are facing federal charges in the 2020 death of a Nashville couple.

Gilad Peled, the owner of Austin-based security company SpearTip Security Services, is one of three men along with Bryon Brockway and Adam Carey who were allegedly hired by Erik Charles Maund to kidnap, threaten, intimidate and ultimately murder Holly Williams and William Lanway in Nashville on March 12, 2020, according to federal court records.

Erik Charles Maund who allegedly hired hitmen left a glowing review for one of their businesses.

According to the date on the Google review, “Maund” wrote a comment about SpearTip Security “a week ago,” which would have been days before he was arrested on Dec. 10.

The review said, “Speartip is very professional and on top of it. They get the job done in an expedited time. Couldn’t imagine using anyone else!!”

In response, what appears to be SpearTip’s owner replied, “Thank you for the kind words always a pleasure working with you.”

Maund, married and living in Austin Texas, had arranged to meet up with Williams in Nashville in February 2020. Lanway learned of the meeting and threatened to expose Maund’s relationship with Williams to his wife unless he paid him to keep quiet.

According to the Department of Justice, that’s when Maund reached out to Speartip Security Services, which specializes in “responding to extortion demands.”

Peled, who “held himself out to be a former member of the Israeli Defense Forces,” worked with Brockway and Carey, both former U.S. Marines, to get the job done.

And on March 12, 2020, prosecutors say, they did. After Maund transferred $150,000 into a bank account controlled by Peled, Brockway and Carey went to William’s Nashville apartment. There, they shot and killed Lanway and kidnapped Williams, according to authorities.

They allegedly brought her to a construction site near Old Hickory Boulevard in Nashville and shot her several times, killing her, too. 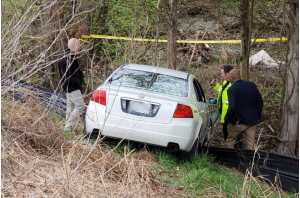 Both reviews were made before any public knowledge of their involvement with SpearTip or the murder-for-hire plot.

Maund, Brockway, Peled, and North Carolina resident Adam Carey, are all facing charges related to the death of Williams and Lanway.

Federal documents said Maund is accused of hiring Peled, Brockway, and Carey to help him deal with the threats and demands. Peled said he was a former member of the Israeli Defense Forces, according to the indictment. The DOJ said the business advertised it helped clients respond to extortion demands.

Maund is being transferred to Nashville and requesting “that any preliminary or detention hearing be held in the prosecuting district, at a time set by that court,” according to court documents.

A new date for Maund’s detention hearing has yet to be set by the U.S. District Court in Nashville. He remains in the custody of the U.S. Marshals Service while he awaits transfer, which the DOJ said could take weeks.

The group faces conspiracy to commit kidnapping, kidnapping resulting in death and carrying, brandishing a firearm in relation to a crime of violence. If convicted, all face up to life in prison.

Maund’s attorneys, Sam Bassett and Perry Minton said they are planning to offer “vigorous defense” against the charges.

“This law firm has been here 60 years representing clients charged with serious matters.  A large percentage of those charges have turned out differently than the public may have perceived at the outset.  We intend to give Erik Maund the vigorous defense to these allegations that he deserves and that the law provides,” Bassett and Minton said in a statement to KXAN.