She didn’t expect that one of her dreams that she’s aiming to achieve could make her regret and led to a quadruple limb and buttock amputation. A mother of two has a warning and message to the entire woman like her who wished to have a perfect bottom but made her regret for the rest of her life.

Apryl Michelle Brown was the subject of teasing for having flat “pancake” booty. This 46-year-old cosmetologist feels insecure, that’s why she swore to herself that once she got enough money she’d buy herself a better one. “I didn’t know if I wanted to look like Janet Jackson or J. Lo,” she told ESSENCE in an interview. “I just wanted a new, bigger booty. “Tragically, her quest for curves cost her all her limbs and almost her life.

And now Brown wants to warn others of the terrible dangers of such illegal treatments. Apryl said: “I’ve paid a terrible price for vanity and I’ll pay for the rest of my life. But I blame no one but myself.

She added “I want to share my story to warn others about these so-called ‘quick fix’ surgeries. I didn’t realize the dangers. I thought it was a harmless injection that would give me the perfect bottom. But the reality was the silicone used wasn’t suitable for humans. It was, in fact, bathroom sealant only suitable for DIY.”

It was in 2004 when Brown paid a “pumper,” an unlicensed person, to inject industrial-grade silicone into her buttocks. By early 2006 she says the silicone had hardened, causing severe pain and infection, ultimately requiring her to have a lifesaving amputation of her limbs last year.

First, the area around the injections began to discolor, then become itchy, then incredibly painful, described by Apryl as ‘like a toothache, labor pain and a migraine.

Remembering what happened to her Brown said “Eventually they went in and removed the silicone, along with the butt cheeks. It was then it became infected and they gave me 24 hours to live. I remember feeling relieved when I heard that.” 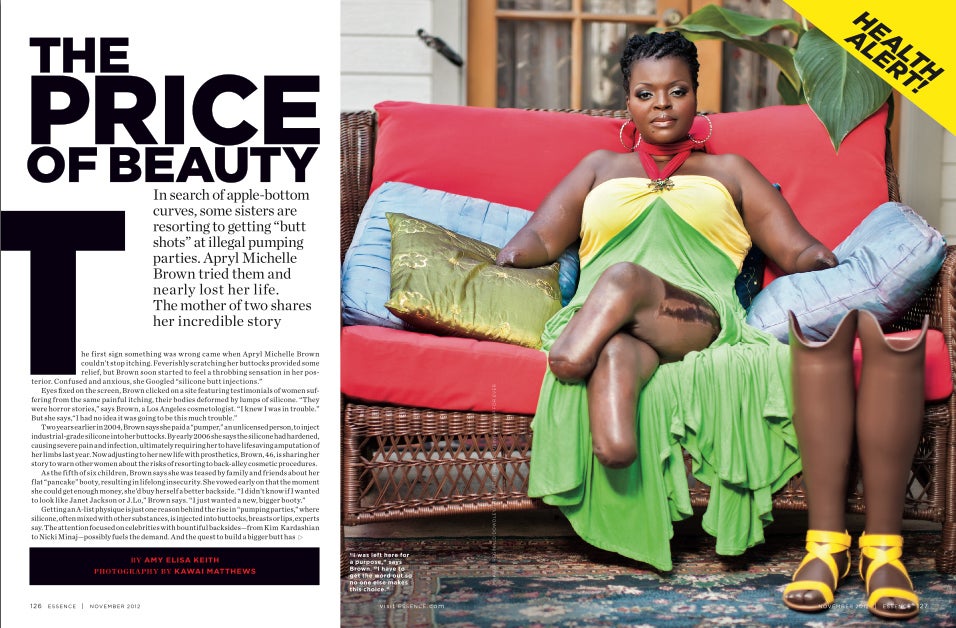 Doctors induced Apryl into a coma and carried out 27 operations, including a buttock amputation and a quadruple lower arm and lower leg amputation. ‘I didn’t know this until I came around,’ she said. ‘When I woke up I had no butt and I wasn’t in pain anymore.’

Brown could no longer remember how much she paid the woman who injected her the silicone, she said that maybe $500, maybe $1,000. But Brown does remember this: A month later she set up an appointment with the pumper. She hadn’t heard any horror stories, so she figured it was safe. Brown was no stranger to cosmetic procedures: She’d previously undergone breast reduction surgery. On this occasion she decided not to go to a plastic surgeon—she was afraid that butt implants would be too expensive.

Her days are now centered on the basics: working with a home health aide whom she relies on to help her dress, bathe and eat. Navigating life with prosthetics while receiving $840 a month in disability benefits has been difficult. Brown explains that her body is always hot because of the artificial limbs, so she has to drink water constantly. Her foot sometimes itches, though it’s no longer there. Despite all this Brown says she refuses to wallow in depression; she is just happy to be alive. “People ask, ‘How do you get through? How are you so positive?’ Because God keeps showing me His grace,” she says.

Before she lost her limbs, but after getting the fateful butt injections, Brown says she overheard some people in the nail salon talking about going to a pumping party. “I said, ‘Feel my butt. I got silicone injections in my butt and now it’s hard and painful.’ And they just looked at me disgusted. And I said, ‘I just wanted to tell y’all because nobody told me.’ They were all rolling their eyes, and that’s okay. The ones that I’m supposed to share my story with, they’ll get it.

“I was left here for a purpose,” she says finally. “I have to get the word out so that nobody else makes this choice.”