Two years ago when the 4-year-old Paislee Shultis was reported as missing from her legal guardian in Cayuga Heights in upstate New York, without any luck.

The missing child was then believed to be abducted by her biological parents Kimberly Cooper, 33, and Kirk Shultis Jr., 32 who both lost custody of her in 2019 according to the authorities.

And on Monday, after two years of searching, the authorities now found Paislee who is now 6-year-old hidden by her biological parents and Kirk Shultis Sr, Paislee’s grandfather in a “dark and wet enclosure” beneath a basement staircase.

After Kimberly and Kirk lost the custody of Paislee and their older daughter, the two girls were supposed to be relinquished to their legal guardian, however, Paislee disappeared while her older sister was the school.

Shultis later showed up and claimed that Cooper had moved out of state and that he had no idea where his younger daughter was — he even went to court and maintained that story.

Authorities had visited 35 Fawn Road on numerous occasions and were given limited access to the house. The home is covered with several cameras so that inside would have a warning if someone was coming.

Until on Monday evening, Kirk Shultis Sr., 57, who owns the house, was there when the police conducted the search and said he had no knowledge of Paislee’s whereabouts, the police say. But a little over an hour into the search, one of the detectives noticed that the stairs leading to the basement of the house appeared to be strangely constructed.

After removing several boards police found Paislee and Ms. Cooper hiding in what the police described as a “small, cold, and wet” enclosure. 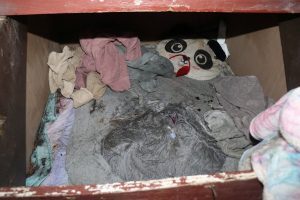 Paislee was examined by paramedics and is reported to be in good health.

Saugerties Police Chief Joseph Sinagra told CNN that “This tip was fresh, it was factual. The information provided was corroborated.”

For the first time, detectives were able to search every room in the house and go to the basement, where the police chief said they found what resembled an apartment.

“There was a kitchen, there were bedrooms, a living room area. One of the bedrooms was devoted to Paislee. It had her name on the wall, there (were) clothing items that were spread about the bedroom, the bed had appeared to have been slept in,” Sinagra said.

After moving some boards, they spotted Paislee’s feet. Paislee was alive and well, hiding in “a makeshift room, under a closed staircase leading to the basement of the residence.”

Sinagra also added that “The only problem is she hasn’t attended school and they weren’t educating her at the house.”

The authorities then turned Paislee to her legal guardian to be reunited with her older sister, while they were on the way they happened to pass a McDonald’s made the little girl reminisce about the restaurant

Paislee was soon reunited with her legal guardian and older sister, whom she remembered. On the way to be reunited with them, the detective returning Paislee to her rightful family passed a McDonald’s. The little girl lit up and reminisced about the restaurant.

“The detective turned the car around and went into McDonald’s and got her food from McDonald’s,” Sinagra said.

According to the authorities, they had visited Shultis, Sr.’s house since 2019 and added that there might be several factors that made their visits to prevented from finding Paislee. Including the fact that the home was decked out in security cameras.

“A number of times we would go there and sometimes we were met with resistance and at other times they’d say, ‘oh, no, you can come in and look around,” Sinagra explained. “There’s nobody here. The child’s not here.’

“And our belief is that at times when we went into the residence, although we were given limited access, they were using this location to hide the child.”

“It’s nice to know that the child’s been located and that the child is healthy and safe,” Sinagra said. “That’s the most important thing at the end of the day.”