After they called the janitor to the gym, she was in for the surprise of her life, and one that she wouldn’t soon forget!

In her nearly 77 years on this planet, faithful school janitor Frances Buzzard had never had a birthday party. However, everything about that was about to change as this woman who acted like everyone’s grandmother in that little school was soon to be called to the auditorium. They captured all of it on video for our posterity.

Buzzard was one of those people who worked selflessly behind the scenes at Belle Elementary School in West Virginia. She never complained, and she was beloved by both the students and the staff member because she was a cherished school custodian who completed her duties with a great attitude and always had a smile on her face despite having a rough upbringing, according to the Charleston Gazette-Mail.

Of course, few individuals knew the backstory of this woman, but she had grown up in poverty and had never experienced the joy of having her very own birthday party. True, her family did attempt to give her a party once, but she said that “it was very icy and cold, and nobody came.” Once the faculty at the school learned this secret, they had to do something about it, so they devised a plan to change it for this adored employee.

Back in the early days, “they didn’t do things like that,” Frances recalled. “We didn’t even have Christmas parties either. They would try to get us some fruits and nuts when they could afford it.”

Not long after the lunch period had ended, Frances and her coworker, Rendell Heater, heard an unexpected announcement over the intercom and that is when the office called the two custodians to the auditorium. Naturally, Frances expected that there was probably a mess for her to clean.

“Rendell and Miss Frances, could you please report to the cafeteria?” the loudspeaker requested, crackling throughout the school.

As she headed toward the auditorium, she had to go through the cafeteria, and that is when 200 students and staff members yelled “surprise!” Needless to say, Frances was totally shocked, and started grinning from ear to ear as she realized what was happening.

Principal Amanda Mays presented Ms. Buzzard with a “Happy Birthday” sash and a tiara before she directed her to sit and watch as a projector lit up the screen to show a movie honoring her time at the school. 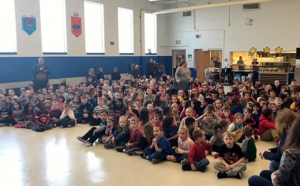 Throughout her party, she was all smiles and even shed a few tears.

Frances Buzzard had been hired at the school just a year prior, and to everyone’s surprise her age simply wasn’t a deterrent to her ability to do a great job keeping the school clean.

“When they said we were getting a custodian who was 75, 76 years old, I thought ‘Oh, great! That’s just wonderful,’ because we already don’t have enough custodial help,” said school counselor Chelena McCoy.

The school knew there was something special about Frances immediately after they hired her. One day, the elderly janitor came into the office and announced she’d be polishing up to make everything “shiny.”

“I’m, like, ‘Well, that’s not your job, Miss Frances.’ She said, ‘Oh, yes! That’s our job.’ And I’m thinking, ‘You know, I’ve worked in this school forever, and nobody ever said anything about polishing,’” Chelena said. “So, this lady is twice our age, but she does three times the work. She’s something else. Everybody just loves her. You can’t get her to stop.”

Even though it took 77 years for Frances to have her own birthday party, it was well worth the wait, because both the students and staff alike realize what a treasure that Frances Buzzard truly is, and that’s what they called her to the gym that day.