One thing I hate about our country, like everything we do even our intention is good  – leftist liberals will find their ways to connect that to this so-called “RACIST” propaganda.

But what happened in a clothing display at a Walmart in North Las Vegas might be another story, and some people are calling it racist and insensitive. It’s for you to decide…

A Walmart in North Las Vegas has come under fire for what many local shoppers are calling a racist display in its store. The location, which was on Lake Mead Boulevard and Rancho Drive, hung clothing from the ceiling with neon green chains.

The photos went viral on social media, and it’s creating quite the buzz. Many were outraged and claimed it was racist, they demanded that something should be done about it. When you see it for yourself, you decide if someone deserves to be fired.

Eventually, it draws attention to the news outlets, KTNV Channel 13 Las Vegas reported this incident while captioning, “Is a clothing display in a Las Vegas Walmart really racist?”

Hanging from the ceiling by neon green chains, children’s clothing items were displayed in what some say looks representative of a hanging.

One said it was offensive because “people kill themselves,” but most of those who took issue did so because of race.

Also, many became furious as they felt the display was a racist gesture since some of the attire was black. 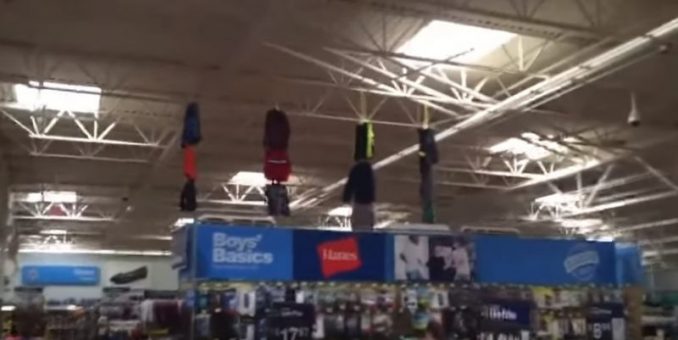 “Definitely creepy-looking at best. Why not just hang individual articles of clothing instead of whole outfits?” one person asked on a discussion forum, where another chimed in, “Most of the ones I saw in the video were three shirts hanging one above the other. I did not see whole outfits. It was not the best display of clothing (how can I get a good look to see if I like it if it is 5 meters in the air), but I don’t think it was racist.”

Then, there were those who didn’t even take notice or see anything “off.” In fact, when a local news anchor showed footage from the Walmart store to some shoppers, they didn’t even notice the display in the background. Instead, they were looking at prices or shoppers in the clip, confused as to what they might be missing from the “infuriating” footage.

The display was not mannequins or even human-shaped figures. It was simply made up of empty clothing items, and up close, they weren’t even outfits but just random tops of various colors. So, are three tops or jackets hanging in a row still offensive? Some say yes.

Even when presented with this information, some who were offended were not reassured. When asked if the facts of the matter changed his opinion of the incident, one man responded, “Not really, no,” asking, “Why would you still display four black items hanging from the ceiling?”

The display was removed, although the store’s corporate office did not provide a comment. Still, the situation begs one very important question relevant to more than just this display. “What makes something offensive?” the news anchor asked, “The number of people it upsets or the reason it’s upsetting?” But, there’s more we need to ask ourselves.
Does intention play a part when determining what’s offensive? That’s the tricky thing about deciding what’s insensitive and what’s not. It’s all subjective. And, as we saw here, not everyone will feel the same way.
If something upsets even one person, is it suddenly a punishable problem? I’d say that’s a very dangerous precedent to set because those who are easily offended might just find themselves unintentionally offending one day.
Watch it here: Youtube/KTNV Channel 13 Las Vegas