What Disney Was Just Caught Forcing Their Employees To Do Is Beyond Sickening!

Pictures of a handbook titled “Reimagine Tommorrow” appear on one of Rufo’s Twitter posts with the accompanying message:

“According to a trove of whistleblower materials, Disney has launched a ‘diversity and inclusion’ program, called ‘Reimagine Tomorrow,’ which includes trainings on ‘systemic racism,’ ‘white privilege,’ ‘white fragility,’ ‘white saviors,’ ‘microaggressions,’ and ‘antiracism.'”

I’ve obtained internal documents that will shock you.🧵

Rufo told the Fox News host, “I think it should be very clear that Disney makes its money on middle Americans, who go to their theme parks, who buy their content. And those people should know that this corporation hates you, it hates your culture and it hates the color of your skin! And I think Americans should reject this kind of politics, and reject the companies that are pushing it, ”

“Multiple Disney employees told me the political environment at the company has intensified in recent months. There are “almost daily memos, suggested readings, panels, and seminars that [are] all centered around antiracism,” said one employee. The company is “completely ideologically one-sided” and “actively discourages conservative and Christian employees from expressing their views.”The full 22-page document can be found here.

According to a trove of whistleblower materials, Disney has launched a “diversity and inclusion” program, called “Reimagine Tomorrow,” which includes trainings on “systemic racism,” “white privilege,” “white fragility,” “white saviors,” “microaggressions,” and “antiracism.”

The disgusting, divisive Disney program is titled, “reimagine tomorrow,” and asks the question, “What Can I Do About Racism?”

The title of the brochure that according to the whistleblower is given to employees, is “Allyship for Race Consicousness”. 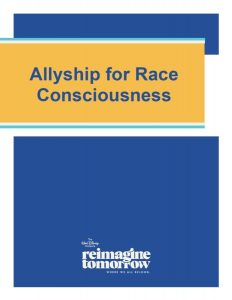 Inside, the “Allyship for Race Consciousness,” are statements telling Disney employees that the deaths of Black Americans at the hands of police officers, many of them with lengthy criminal records, who refused arrest, are due to “systemic racism,” and “transphobia.” The manual also talks about how they stand in solidarity with protests “due to police brutality targeted to Black people around the world.”

Another page in the manual talks about how Disney employees should deepen their insight and knowledge to understand the magnitude of racism their minority colleagues are facing.  “Opt for sources from Black authors, journalists, and organizations,” it tells the reader with a list of links below. 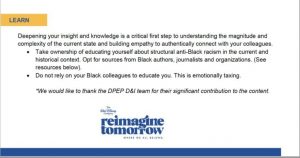 White employees are told to “work through feelings of guilt, shame, and defensiveness to understand what is beneath them and what needs to be healed.” They must “listen with empathy [to] Black colleagues” and “not question or debate Black colleagues’ lived experience.” They are told to “Avoid messages like, ‘I can’t believe this is happening,’” when discussing the violent BLM movement with others.

Disney tells employees they should reject “equality,” or “equal treatment,” and instead strive for “equity,” or “the equality of outcome.” They must “reflect” on America’s “racist infrastructure” and “think carefully about whether or not [their] wealth” is derived from racism. 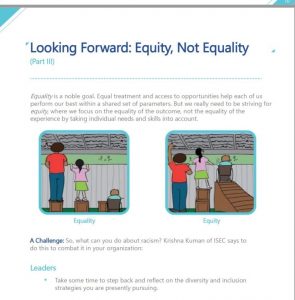