Kids’ clothing designs can be surprisingly controversial. Over the years, there have been incidents where a design was approved, but parents soon noticed an inappropriate mistake which lead to the design being recalled. There’s also been a big push from parents to make children’s clothes more gender neutral to minimize gender stereotypes.

A mother of two made a shocking discovery when comparing her nine-month-old son’s clothes to her daughter’s size 3T clothes, noting that her daughter’s clothes were smaller than her son’s, even though her son was younger.

Physician assistant and TikToker Anne, known on TikTok as @annethepa, took to social media to share a video of herself comparing her children’s dress sizes.

She shared her discoveries on her social media account, noting that there is a serious issue with toddler clothing sizes across the board, despite items being labeled as the same sizes.

“If anyone is wondering why girls have body image issues, these are my daughter’s shorts,” she said in the video, then laid her son’s 6-9 month shorts on top of them. They matched exactly.

Anne showed that there is a clear problem with toddler clothing, as girls’ clothing is measured smaller than boys’ clothing, even though the label says the same size or smaller size. 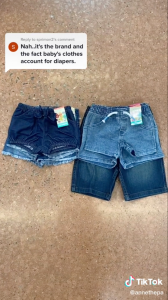 The comments on the TikTok videos were filled with disgust and dismay at the ridiculous differences in sizes from girls’ to boys’ clothing.

One person commented, “Why wouldn’t baby clothes be unisex, there’s absolutely no physical difference between them for quite a while.”

“I have one girl in 4T, 1 girl in 12-18 months,” another added. “When I’m folding laundry I have to look at the tag with the shorts! They can wear each others most times.”

“As kids, boys aren’t bigger! As an elementary school teacher, I notice that the girls are usually bigger than the boys until around HS in a lot of cases!” a third chimed in.

A fellow parent noted, “I stopped buying them shorts/pants from the girls section. The clothes are skin tight and super short.”